Universal health coverage has both technical and political implications and all these have to be considered and understood by all stakeholders, Dr. Fillipo Curtale of the Belgium technical Cooperation (BTC) cautioned. “Resource mobilization and pooling are political decisions; pooling resources involves re-distribution which is a highly political process”, he emphasised.

Resonating with the observation by Dr. Peter Okwero in his presentation, Fillipo also highlighted the need for public space for universal health coverage; for the public and stakeholders to discuss it, understand it and embrace it.

The matter of engagement was a major highlight of this session. Dr. Grace Kabaniha – WHO Uganda Country Office Health Economist noted that engagement will help bring out better and unified understanding of how any suggested interventions fit in the existing policies across sectors and how they can accommodate new things.  “How are we engaging in terms of knowledge translation and exchange between sectors, e.g. with Finance? They are planning but using their own evidence”, she noted.

She also pointed out a key challenge in engaging for universal health coverage, “There is a big bottleneck in engaging around universal health coverage of political commitment and leadership in health sector and across government. We need to work together as partners to ensure this happens. Systematic, inclusive and intentioned engagement with action attached and coming out of symposia and workshop recommendations”. 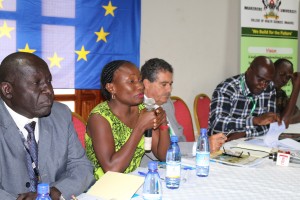 George Steven Okotha – Director Operations at the Insurance Regulatory Authority focused his discussion on the National Health Insurance. Key among the issues around the scheme, according to him is to figure out how to mobilise the market. The Ugandan market was described as largely informal by Dr. Okwero which makes revenue collection problematic. The same structure may be challenging in the implementation of the National Health insurance scheme.

Implementation of the National Health Insurance scheme is a multi-stakeholder arrangement with the health service user, the scheme provider and the health service provider at the core of its successful implementation. “Health insurance is a queer animal and not a straight forward concept; managing the three stakeholders in there effectively required to have the Ministry of Health on board in terms of regulation. The issue of inflating medical bills because the patient belongs to an insurance scheme is still a challenge said Mr. Okotha.

Mr. Okotha added that the Insurance Regulatory Authority has contributed significantly to the national health insurance scheme discussion and is working hard to strengthen the regulatory environment to ensure once universal health coverage takes off, all nuts are tightened.

Assistant Commissioner for Planning in the Ministry of Health, Mr.Tom Aliti said the Ministry is in the final stages of developing the Health Sector Development Plan which is the vehicle to move Uganda towards universal health coverage. He however noted a number of things that have to change for UHC to be realized. “For universal health coverage, we need to manage available resources well and mobilise more, build capacity and strengthen systems. Currently, we finance health at the level of USD 53 per capita and we have a financing gap of USD 77 per capita. Overall, there is a financing gap of 7.7 trillion Uganda shillings”.

He also emphasised the need to tackle out-of-pocket expenses, saying of the USD 53 per capita, government only contributes 16% while households contribute 40%. This he said, defeats the very tenets of universal health coverage.

The discussion that followed the panel submissions was equally intriguing with delegates focusing concerns on the scope for fiscal space in Uganda, the need to expand understanding and application of the concept of political commitment and how best to maximize benefits out of off-budget resources. .

The issue of Ugandans learning to pay taxes, if they expect to receive services and key actors’ understanding of Uganda’s political economy as a key aspect in understanding and running the health sector and getting smarter to engage in an environment where there are more players with the same interests, were all discussed as key.

Perhaps focusing on prevention interventions and services will yield better returns on investment for universal health coverage. The idea is to keep as many people away from hospital. “About 77% of our diseases are preventable, yet we spend about 220M on medicines and only 15M on PHC non-wage. We want quick wins and do not think long term. We don’t have clear accountability responsibilities making tracking of use of resources problematic”, Mr. Aliti concluded 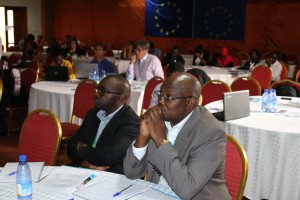 To sum up the discussion, Dr. Timothy Musila of the Ministry of Health’s Planning Departments made the following refreshing statement; “We need more money for health but we also need more health for the money, value for money. There is too much wastefulness, inefficient use of resources, outright theft and leakages in the health sector”.

The SPEED initiative was requested to consider generating and providing evidence on how ready the country is; politically and institutionally to embark on implementation of universal health coverage.