Dr. Elizabeth Ekirapa Kiracho, a Health economist with the SPEED project and team leader for the FHS consortium, had an engagement with the   VHT National Coordination Committee at Hotel Africana on 12th April 2014. The team is spear heading the development of the Community Health extension worker strategy for Uganda.  Uganda still has a high burden of preventable diseases and therefore approaches that can aid in reducing this burden are still at the fore front of the countries health sector policies and plans. One of the main strategies that has been used to address this problem was the VHT strategy, which was rolled out in 2001. Although it had some positive outcomes, it also faced challenges. Uganda is therefore now in the process of introducing a new cadre that will work alongside the village health teams.  In line with its mandate the SPEED project did a critical analysis of the proposed CHEW strategy and shared views from key stakeholders, so as to inform the development and piloting of the strategy. The key messages that were presented and later discussed revolved around the following. 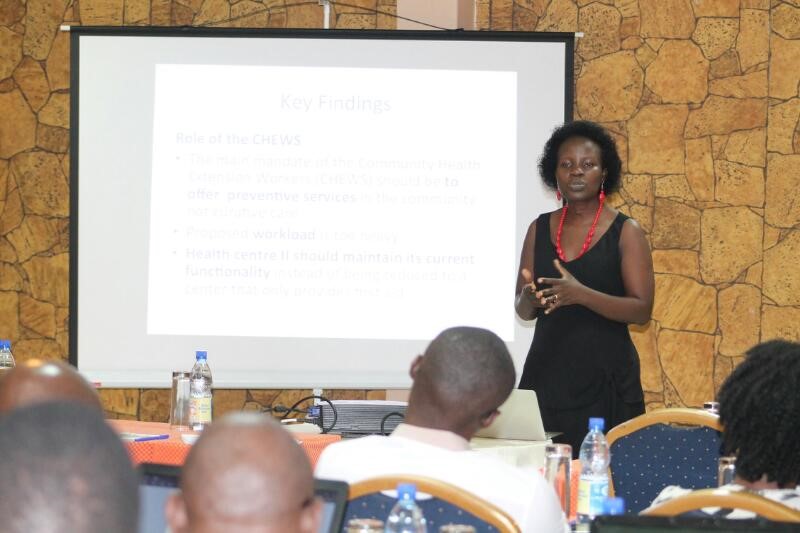 Dr. Elizabeth Ekirapa during the engagement of the committee members

At the end of the discussion Dr. Oleke the National VHT Coordinator noted that many of the issues were already being discussed and while some could be resolved others such as having a clear career path and adequate funding may take a longer time to resolve. He appreciated the work done by SPEED and its partners and called for further engagement in ascertaining the opinions of different stakeholders.