NEW POST!
You are at:Home»Engagements»SPEED paying a courtesy visit to the Vice-Chancellor- Makerere University
By AdminSPEED on 21/07/2019 Engagements

On July 12th 2019, the SPEED director Prof Freddie Ssengooba paid a courtesy visit to the Vice-Chancellor-Makerere University Prof. Barnabas Nawangwe. The visit intended to update the VC about the project and the upcoming Symposium on “Partnerships, Policy and Systems Developments for UHC.”

SPEED, a project that started in 2015 with funding from European Union is a leading consortium of five institutions working to strengthen capacity for policy analysis, advice and influence to accelerating progress towards universal health coverage and health systems resilience in Uganda.

Prof Ssengooba briefed the VC on different activities and achievements the project has attained since its inception. He thanked the VC for the institutional support the university has given to the project since 2015. Among the key achievements noted, was a ground breaking book on Universal Health Coverage launched last year, the different policy questions the project has addressed  for the Ministry of Health and different institutions,  provision of policy advice to policymakers in and outside Uganda among other activities. 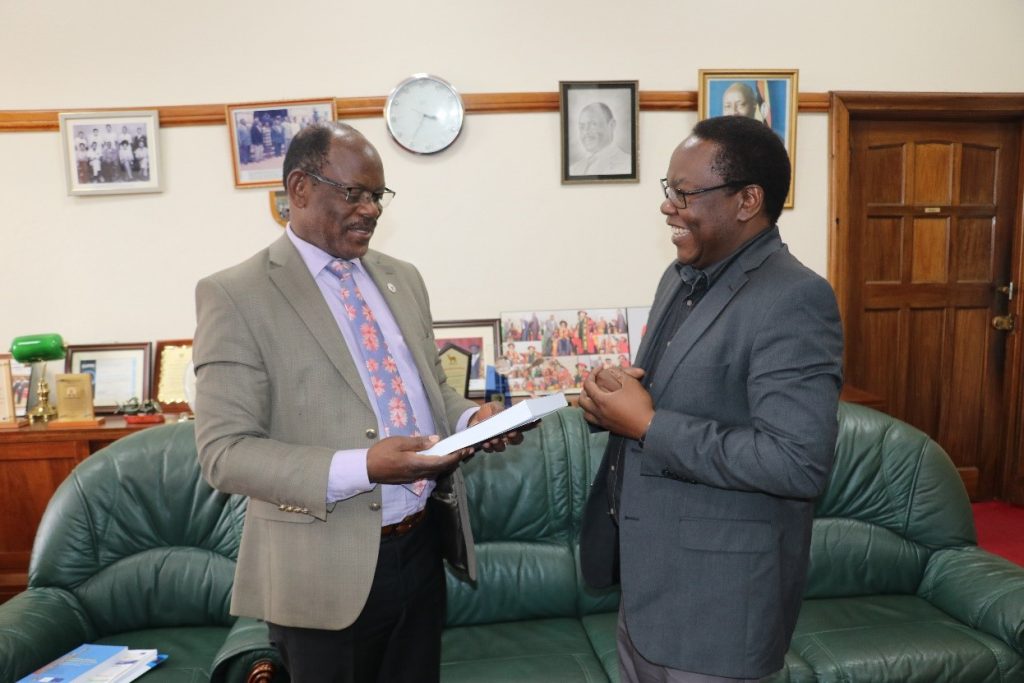 Prof Freddie giving a copy of the book on Universal Health Coverage written by the SPEED project.

On the UHC book, the VC advised SPEED project that currently Makerere has a functioning University press that does publish books. He asked the director to consider publishing some of the project materials with the university press, noting that it is cost saving.

Further Prof Ssengooba, informed the VC about the upcoming symposium on partnership for UHC.  The VC advised SPEED to invite the Prime Minister as a guest of honour. He offered to write a letter inviting the Prime Minister, Minister of Health and Education to the symposium.

Prof Freddie informed the VC that this year’s symposium is organised on the multisectoral arrangement; how different sectors support each other. He emphasised that the symposium will clearly show that health cannot stand alone but has to work with other sectors eg water, transport, security etc to achieve its goals.

“The symposium will help us to sensitive people that health does not come from  the ministry of Health activities  alone.”  Prof Ssengooba emphasised. He further noted that SPEED project has done well noting external evaluation reports that were done by  Prof Koot Jaap from Supporting Public Health Institutes Programme – SPHIP and Adroit consult international.

The Vice-Chancellor was pleased with the European Union for funding SPEED project. He proposed to communicate to this effect.

Prof. Barnabas Nawangwe reading through some of the SPEED project reports.

With an increasing demand for health policy work, the two professors discussed the possibilities of starting a centre for health policy and systems in order to sustain SPEED project’s work. The VC requested SPEED to draft a concept that he can support to have the centre operationalized. “I will surely support this initiative…. This centre will as well support the move by the School of Public Health to become an independent college”. Prof Nawangwe noted.

Prof Nawange thanked SPEED director for the work well done which has contributed to the outstanding performance of the Makerere University in research and innovations in Africa.