NEW POST!
You are at:Home»Engagements»Symposium on Universal Health Coverage
By AdminSPEED on 15/05/2015 Engagements, Featured, Latest News, NEWS and UPDATES

The first National Symposium on Universal Health coverage has today opened at Silver Springs Hotel in Kampala. The three-day symposium is held under the theme “Towards Universal Health Coverage in Uganda: Building on Successes and Ensuring Health Systems Resilience”.

Opening the symposium, Professor Pius Okong who is the Chairman of the Uganda Health Service Commission noted that one of the key challenges currently is the issue of coordination and harmonisation of programmes. Effective coordination is one of the key ingredients of a good plan for universal health coverage.

He pointed out a key issue regarding the visibility of citizens in national policies, saying this is largely due to the informal nature of the Ugandan citizenry. This he said will call for some level of advocacy to ensure the health of Ugandans is reflected as a priority in national development documents. 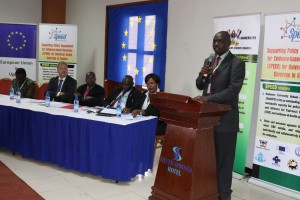 Acting Head of Cooperation, Delegation of the European Union to the Republic of Uganda, Dr. Stefan Lock hailed Uganda for achievements in lowering infant mortality and HIV. He however noted the health system in Uganda still has a lot to do to assure Ugandans of adequate social protection. “Deaths for example related to pregnancy and childbirth remain unacceptably high with an estimated 20 women dying daily while giving birth in Uganda”, he emphasised.

He also hinted on the need for consideration to ensure improved coordination between the various stakeholders and the private sector in government’s efforts to attain Vision 2040. 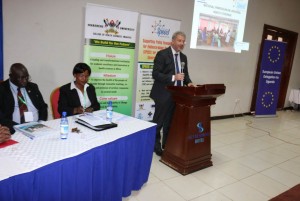 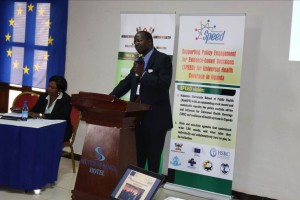 The symposium is being organized by the Makerere University School of Public Health under the Supporting Policy Engagement for Evidence-based Decisions (SPEED) for Universal Health Coverage. SPEED is a partnership funded by the European Commission.