NEW POST!
You are at:Home»Engagements»SPEED spearheads efforts to form a multistakeholder coalition on scale-up of Indoor Residual Spraying for malaria elimination in Uganda
By AdminSPEED on 09/03/2018 Engagements, Featured, Latest News, NEWS and UPDATES

On 1st March 2018, SPEED with the thematic leadership of Uganda National Health Consumers Organisation (UNHCO) – the SPEED partner lead on advocacy and coalition building-convened a stakeholders’ meeting on scaling up Indoor Residual Spraying as a core intervention for malaria control in Uganda. The meeting was held at Skyz Hotel in Kampala. The SPEED team was led by the Project Director Associate Professor Freddie Ssengooba and the UNHCO Executive Director, Ms. Robinah Kaitiritimba.

The main meeting objective was to form a coalition to advocate for and influence policies and practices for scale-up of IRS in order to contribute to the elimination of malaria in Uganda. The meeting was graced by 5 members of Parliament including- Hon Balyeku Moses and prominent health experts, including Prof George Kirya, representatives from civil society organisations, malaria implementing partners, Uganda Police and the media.

In her welcoming remarks, Ms. Robinah Kaitiritimba emphasized the need to reflect on Uganda’s progress in ensuring eradication of malaria in the country. She alluded to the fact that malaria is a major problem for the country’s development. She acknowledged the presence of the experts at the meeting especially Prof Freddie Ssengooba who later addressed participants on the needed expertise and experiences to push for Universal Health coverage in Uganda.

In his opening remarks, Dr Jimmy Opigo, the Manager, National Malaria Control Program (NMCP), explained that the Government of Uganda through the Ministry of Health is committed to reducing/ eradicating malaria in the country.  He added that the only challenge is still how to do this optimally. He added that the government is aware that malaria is the highest cause of morbidity in Uganda but the only challenge is that this had not translated into the allocation of enough resources towards malaria control. He also elaborated the multipronged approach being used by NMCP and partners to curb malaria. A number of initiatives are in place, for instance, distribution of mosquito nets. He called upon members to commit to a collective action towards the elimination of malaria. He added that IRS is the most effective way to get rid of mosquitoes but must be used in combination with other control mechanisms.

Professor Ssengooba in his presentation shared insights that need to be taken up by leaders especially the Members of Parliament under the Uganda Parliamentary Forum on Malaria (UPFM). He said “malaria still causes huge losses to the Ugandan health system and leads to economic losses at household and community levels. In fact, it cuts across all sectors of life”.  He appreciated the Members of Parliament for having come up with an initiative UPFM,  to advocate for a malaria-free Uganda.  He noted several malaria control initiatives that have been undertaken in Uganda and in particular IRS. He cautioned members against using the term “hot spots” for malaria because the majority of districts in the country are malaria endemic. “There is a need to have a strategy that will cover the entire country since malaria is in all parts of the country”, he emphasised.

Through the use of videos taken from districts in Northern Uganda where IRS was applied, he showed evidence that malaria had reduced in Northern Uganda during IRS implementation but cases increased soon after the intervention was abruptly stopped. The leaders from this region testified about IRS benefits in terms of; reduction in malaria infection rates, patients in hospitals reduced, increased school attendance and improved household productivity, among others.

He recommended effective partnership by the government with other agencies for financing the eradication of malaria especially through the use of IRS. In addition, he recommended the use of the available workforce especially the unemployed youth to do the spraying, leverage services of men in uniform (UPDF, Uganda Police, Uganda Prisons Service), as a solution to concerns that implementation of IRS is expensive. 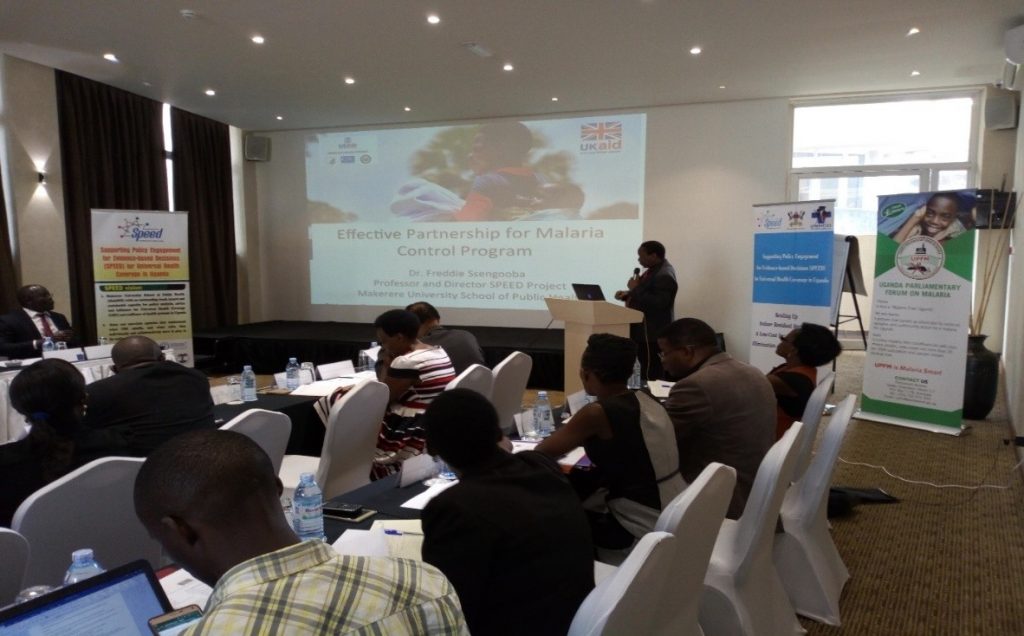 A presentation by Mr. Moses Ogwang (Assistant DHO Kole district) on two models of IRS implementation namely a) project-led and b) district-led showed that the latter was far less expensive due to the reduction in operational costs and optimisation of existing government systems.

The Members of Parliament through their umbrella platform, Parliamentary Forum on Malaria expressed their commitment towards supporting all initiatives geared towards elimination of malaria in Uganda.  The Platform chair, Hon Balyeku Moses affirmed that the fight against malaria is in line with the President’s move on improving the wealth of all households in Uganda. He promised that Parliament through the forum will provide the needed support to ensure that IRS initiative is allocated enough funds through the budget allocations. He added, “The forum is to make aware all members of parliament concerned about the malaria situation in their districts”. The Forum patron is the Right Honourable Speaker of Parliament, which adds to the political clout of the organisation. The MPs requested for increased support by the technical teams, generate the required evidence and provide it in simple ways understandable by all non-technical decision makers. 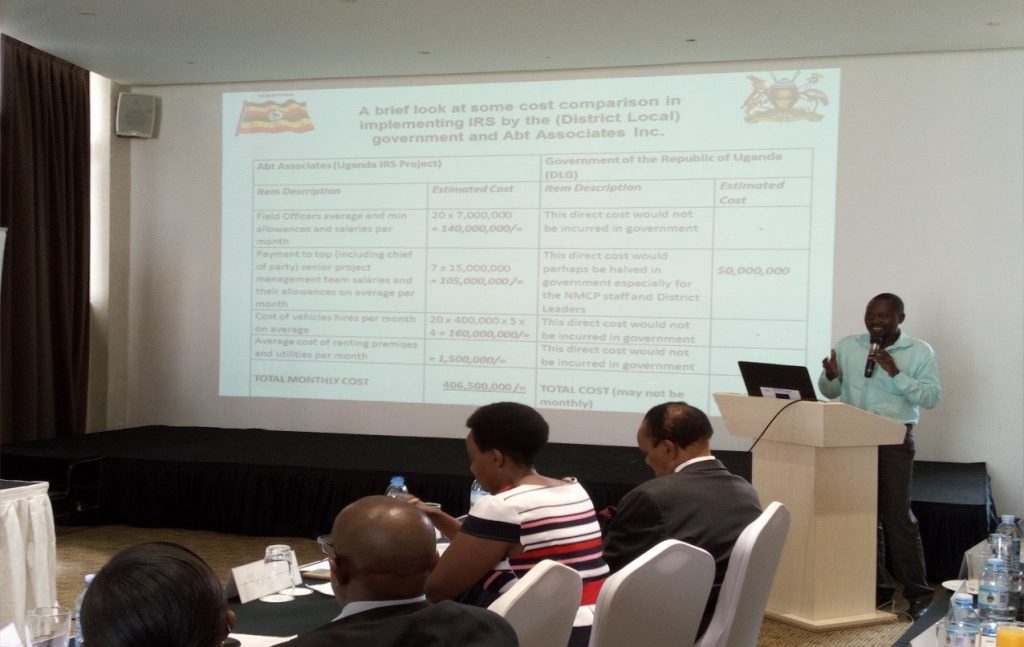 Mr Moses Ogwang making a presentation on IRS implementation in Kole District: He emphasized that the IRS implemented phase managed by District Local government was much cheaper than that undertaken by the international organization (Abt Associates)